2020 is over - and not a moment too soon. This was a grueling year that somehow managed to pass by both quickly and slowly at the same time.

The pandemic meant our users relied on our Kollaborate cloud service even more, so much of the year was spent on infrastructure and making sure we could accommodate the spike in usage. We did however deliver major new features such as folder downloading, heatmaps and transcription improvements.

Our self-hosted version of Kollaborate received Docker integration, which greatly simplifies installation and management for customers. 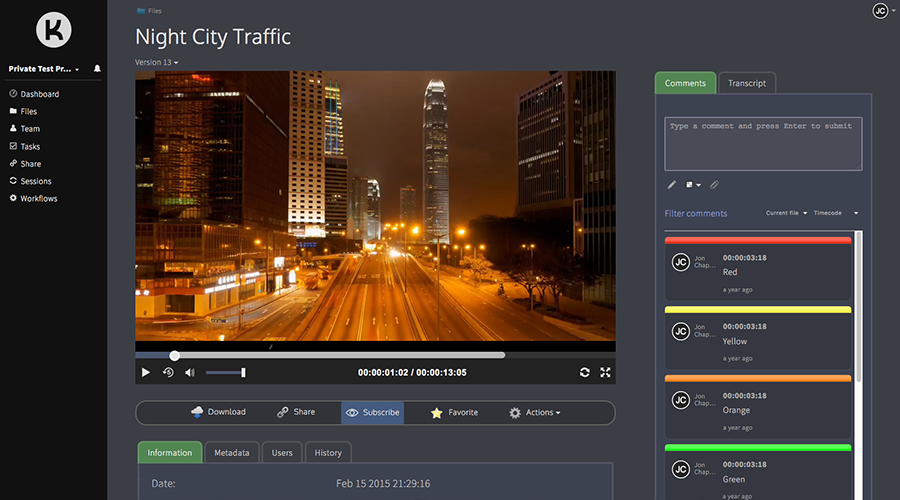 We embarked on a mission to rewrite Kollaborate in its entirety, which we designed in such a way that the new components could be slotted into the existing site so that we could roll it out in stages.

Some of the new parts are already live on the site and we're just about to roll out a new release in which the vast majority of the site is running under the newer backend. There are still a small number of features using the old system that we plan to address in a future update. The new version provides speed and reliability improvements, and once all features are running on the new system in future we'll have even more options to improve speed further.

We are planning to do the same for the frontend next, which will also be done in stages.

In addition, we plan to focus on the Kollaborate helper apps over the next year, including new workflow plugins for Final Cut Pro X and DaVinci Resolve.

And of course, we have lots of new ideas for features that we want to keep under wraps for now...

We've been wanting to create cross-platform apps for a while now and the big barrier to that was one of tooling (it was difficult to find tools that met all of our needs and were also reasonably pleasant to use). This is an issue that is almost fixed now and so we plan to look more seriously at Windows support in 2021.

Since this would require products to be rewritten from scratch, we will do so on a priority/ease-of-development basis and so not every product will therefore be cross-platform by the end of 2021.

This is intended as a list of our major goals / priorities and we are planning many more things not listed here. Thanks to all of our customers for their support and we hope Digital Rebellion products continue to improve your projects in 2021.