Until recently, most of our users were still using Snow Leopard. Then suddenly a massive switch occurred and a majority upgraded to Lion. This may have been because applications like Adobe Premiere and Avid Media Composer now require Lion or it may have been because the MobileMe shutdown forced people onto iCloud.

In Lion, Apple inverted the scroll direction so that up scrolls down and down scrolls up. Some people prefer this but you can switch it off by going to the Trackpad preference pane and deselecting Scroll direction: natural in the Scroll and Zoom tab.

By default, the Finder's status bar at the bottom is hidden. To switch it back on, go to View > Show Status Bar. 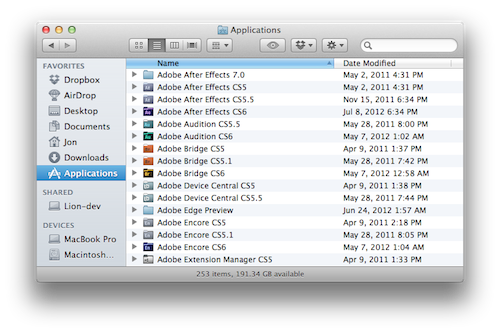 By default, scroll bars appear briefly in Lion and then disappear. This can be annoying because they briefly obscure the bottom file in a Finder window when in List mode. To make scroll bars always appear, go to the General preference pane and change Show scroll bars to Always.

Hide All My Files

In Lion every Finder window opens into a section called All My Files, which shows every file in your user directory in one place. I much preferred the old way of showing the Home folder, so you can hide All My Files by going to Finder preferences and then deselecting All My Files in the Sidebar tab.

You can also set it to default to the home folder by going to the General tab and choosing your home folder in the "New Finder windows show" popup.

You may also like to show your hard drives and DVDs on the Desktop, which can be set from the General tab. 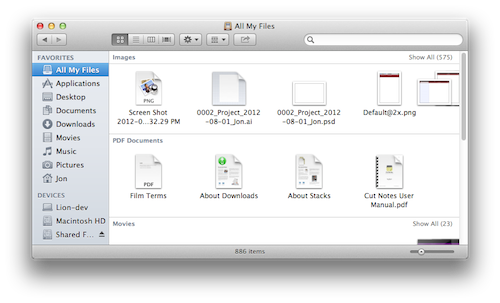 However, in practice, these options have never worked reliably for me and applications will often try to restore old windows regardless. I therefore close windows manually before quitting an application and this fixes the problem. 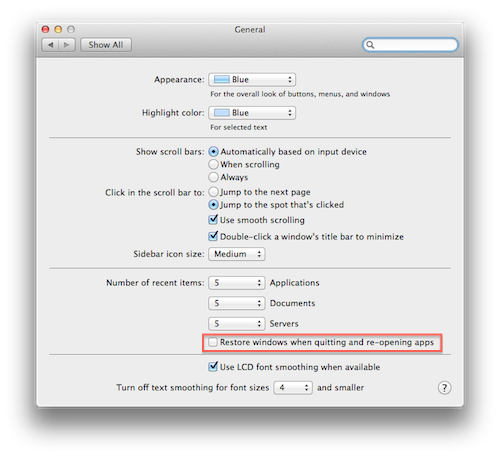 Mountain Lion provides a new option in the Mission Control preference pane called Group windows by application. Deselecting this restores the 10.5 and 10.6 behavior of showing every window on the screen, regardless of which application it belonged to.

Dictation is activated by pressing the Fn (function) key twice. Everything you say is sent to Apple's servers so businesses may wish to steer clear of this feature. To switch it off, go to the Dictation & Speech preference pane and set the radio button to Off.

Mountain Lion includes a new iOS-style Notification Center. To switch it off for 24 hours, Option-click the icon in the far right of the menu bar.

Here is a tip for removing the icon completely but you should do it at your own risk.

Mountain Lion provides a new option in the General preference pane called Ask to keep changes when closing documents. This essentially turns off the autosave feature added in Lion.

Posted by Jon Chappell on Aug 6 2012 to Tutorials, Apple, Software