We recently released Kollaborate 3.5, a major update to our cloud workflow platform.

While the site may look largely the same as before, under-the-hood it's actually a massive rewrite of large parts of the code, with a focus on improving performance and reliability.

There are over 4000 changes in this update, which amounts to about a two-thirds rewrite of the entire backend. The remaining third will be taken care of in future updates. This version improves performance, but we'll be able to take performance improvements even further once that final third is rewritten.

While this version was primarily intended as an infrastructure update, not a feature update, there are a few small new features:

You can now add tags to projects to categorize them, such as "in-progress" or tagging them with the name of the client. Clicking on a tag shows you other projects with that tag.

Department names can now be edited after they are created. Previously you would have to remove and re-add the department under a different name.

French-language audio can now be automatically transcribed from the Transcript tab of the player. 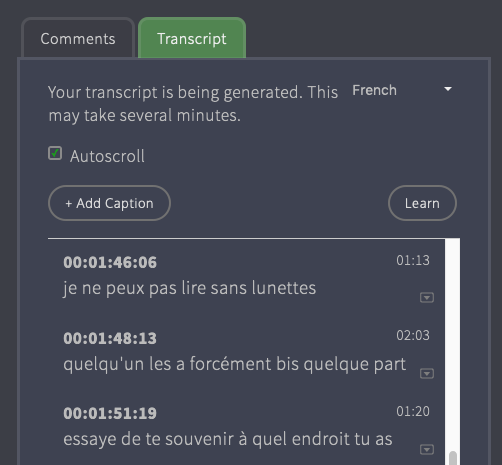 Kollaborate is an essential cloud workflow platform that allows you to share files with clients and team members while integrating with Digital Rebellion apps and services. To find out more, see the overview or register for the free trial.