In the Preferences dialog for Premiere Pro there is a section called Memory that allows you to specify how Premiere Pro and other Adobe applications will use your RAM.

Premiere will allow itself a certain percentage of memory by default and you can decrease this by increasing the RAM reserved for other applications and the operating system. This is a maximum limit and the memory is only used up if it is actually needed. 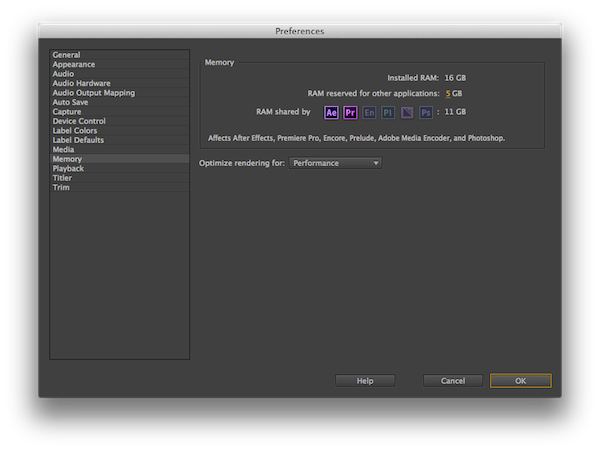 Premiere, After Effects, Encore, Prelude, Media Encoder and Photoshop all use the same memory pool so the RAM is assigned between them. Premiere and After Effects are assigned the highest priority within the pool so closing these applications can improve performance in the other apps.

Adobe applications are designed to share data in realtime through dynamic linking so it is common for users to run multiple apps at once. It is therefore recommended to set these settings as high as possible. The default is around 70-75% of total RAM. Note that it's possible for third-party plugins and importers to exceed the memory limit.

After Effects has a Details button in its Memory & Multiprocessing pane that for some reason the other applications don't have. If you click this button you can see which Adobe apps are running, how much memory they are using and what priority has been assigned to them. As you switch applications from foreground to background, watch the maximum allowed memory change as the priority is lowered. 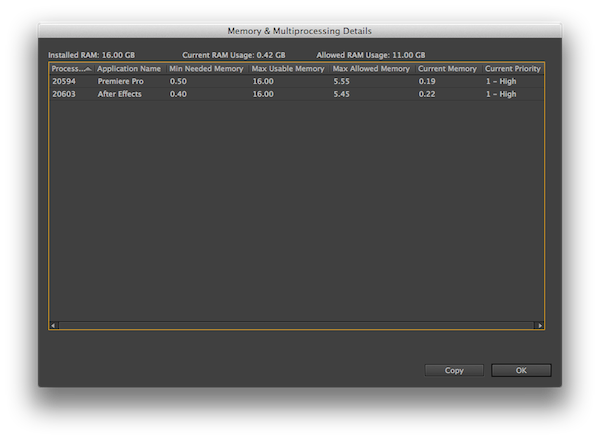 If you install additional memory in your system and it is not reflected in the Memory dialog, close all Adobe apps and delete the file ~/Library/Preferences/Adobe/dynamiclinkmanager/6.0/memorybalancercs6v2.xml (or whatever version you are using). On Windows 7 the file is located at C:\Users\username\AppData\Roaming\Adobe\dynamiclinkmanager\6.0. When you relaunch Premiere the file will be recreated and it should see your new memory.

In the Memory pane you can also optimize rendering for performance or memory. In performance mode Premiere runs several tasks in parallel and uses all of your processor cores (up to 16). In memory mode it runs fewer tasks simultaneously so these settings will lower both CPU and memory usage.