We've just launched Marker Import 2.0, a significant redesign and rebranding of Cut Notes Marker Import. Marker Import is a free tool for taking notes generated by Cut Notes or Kollaborate and importing them into your editing system. In addition to the existing Final Cut Pro 7 and FCPX project support, we've added the following new features.

Open the marker list in Marker Import, then browse for the XML file. Select the sequence and adjust the frame offset if necessary, then click Import Markers to write them to the XML file. Reimport the XML file into Adobe Premiere and your sequence will be duplicated with the new markers. 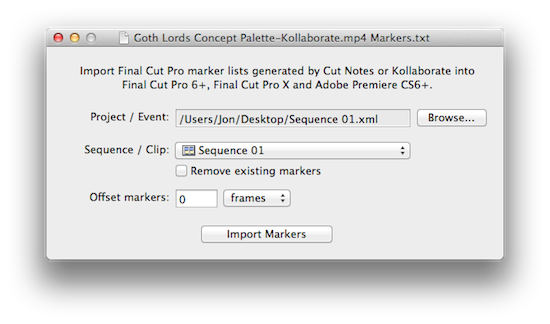 Markers can be imported into a clip within an FCPX event file. Export your notes to a marker list, then export the event to XML from within FCPX.

Open the marker list in Marker Import, then browse for the XML file. Select the clip and adjust the frame offset if necessary, then click Import Markers. A duplicate of the event will automatically open in FCPX.

Other changes in this version include OS X 10.9 Mavericks compatibility and the ability to specify an offset in units other than frames.

Marker Import is a free download available from the right-hand sidebar of the Cut Notes site. You can view detailed guides to importing into different applications in the user manual.