Kollaborate 1.0.5 is now live on the cloud version of the site, offering many new features and improvements to our cloud workflow platform.

Sharing files with people outside a project has now been streamlined. All users wishing to create a link must now have admin permissions (you can set this from the Team page). Creating a link and emailing it is now one step instead of two and previously-used email addresses appear in a popup menu for convenience.

The recipients of the link are shown in a list, including the number of times they viewed it. This only applies to people who were emailed the link directly through the site and only applies to links emailed from now on.

Navigating between files is much easier with the built-in file browser. Click the dropdown arrow to show it, then click on a file to switch to it.

Additionally, metadata tags are shown in their own tab below the player and the sync setting is also remembered so you don’t have to keep clicking it when switching between files for Cut Notes sync.

The upload form has inherited the automatic revisions option from Kollaborate Transfer, where a file will become a revision if a file with the same name (or the same with a version number such as myfile_0002) exists in the folder.

By default, after uploading you will now be shown the new file immediately. We’ve added a dropdown menu with various options to perform after uploading a file, so if you want to revert to the old behavior select "Edit metadata". 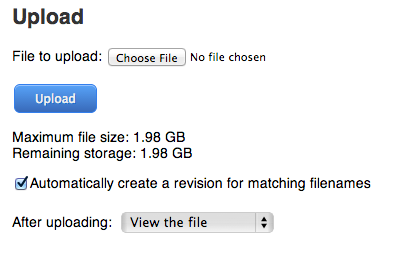 The changes are live for all trial and subscription customers. A corresponding Kollaborate Server update will be coming next week.

Kollaborate is a cloud workflow platform that ties in with Digital Rebellion products like Post Haste, Cut Notes and CinePlay to ease working with colleagues and clients. To find out more read the feature list or sign up for the free no-obligation trial (no credit card required).