My thoughts on the new Mac Pro

Apple just gave us a sneak peek at the new redesigned Mac Pro. 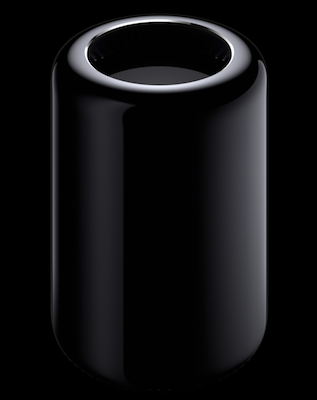 Pros
* It's not dead!
* It finally has Thunderbolt and a significant spec bump
* Dual GPUs
* The Thunderbolt ports are not all running on the same bus
* It's significantly smaller and lighter

Unknowns
* Price
* Is the RAM replaceable or soldered to the motherboard?

The cons are not cons for everyone and it seemed like my Twitter feed was split down the middle. It looks like Apple has focused on FCPX as the target application but not really paid much heed to other pro apps people might want to use. I think this is a sign that people at the very high end of the industry may want to look elsewhere for their pro computers, whether that is a Hackintosh or a Windows box.

A big problem with lack of internal upgradeability is downtime. If the hard drive dies in a regular Mac Pro, it is not difficult to replace it, and you can be up and running again in minutes if you were smart enough to clone the drive beforehand. The problem with the new Mac Pro is that every issue is potentially a visit to the Apple Store, which could take a day or more for them to fix (not to mention the added cost if you're out of warranty). So it is probably best for facilities to have multiple spare Mac Pros that they can swap out easily.

Which brings me onto my next point - how much is it? Apple didn't say. But assuming everything is soldered to the motherboard and the case can't be opened, the Mac Pro will essentially be a disposable computer that you should not expect to last for as long as your current Mac Pro. A disposable computer should be sold for a disposable price, so I expect the success of the new Mac Pro to entirely hinge on the pricing, especially as comparably-specced Windows computers can be purchased for less.

What that means is that right now we don't really know if the new Mac Pro is worthwhile until we get more details, but it's clear that Apple has put its cards on the table and very much hedged against making a computer that will meet everyone's needs in our diverse industry.

Update: Apple has posted more details on their site and it looks like both hard drive and memory are upgradeable. This is great and makes me feel much better about the machine but I still think it will depend on pricing.

Update 2: Blackmagic says work is underway to support the Mac Pro in Resolve and Adobe says the upcoming Premiere Pro CC should support it out of the box.

Posted by Jon Chappell on Jun 10 2013 to Analysis, Apple, Hardware