Apple's recent obsolescence of Final Cut Studio has forced a lot of us to reexamine which editing platform we want to use for future work. Ironically, Adobe Premiere Pro is a much easier transition for FCP 7 users than Final Cut Pro X due to its similar interface, support for old FCP projects and ability to use FCP's keyboard shortcuts.

The transition to Premiere is easier than any other NLE but there are lots of little things that I miss from Final Cut Pro. Here's a list of some of them, in no particular order.

1. Cutting on the fly

The Ctrl+V keyboard shortcut in Final Cut Pro can be used to make a cut on the timeline at the current playhead position. While Premiere also has a keyboard shortcut for cutting (Cmd+K), it pauses playback when it does so. There is no way to cut and continue playing.

2. Sixteen angles in a multiclip

Premiere Pro is limited only to four multicam angles.

Unlike Final Cut Pro, the audio mixer in Premiere doesn't work on a clip-by-clip basis. Every adjustment affects the entire track.

It took such a long time for colored markers to be introduced in Final Cut Pro 7 that I was sad to see them disappear in FCPX. Premiere needs this too. 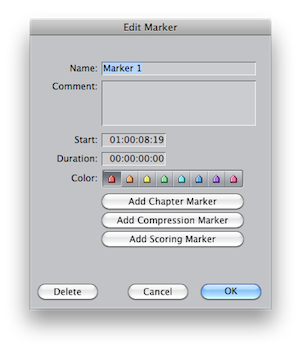 Final Cut Pro can also export text-based marker lists, which is a great way of sending markers to another application. If Adobe were to implement this, I would also recommend they include a way of importing markers from a list, which Final Cut Pro unfortunately lacks.

Like Final Cut Pro, Adobe Premiere has a useful Paste Attributes command. However, unlike FCP, this function does not allow you to specify which attributes you would like to paste - it just pastes everything. This is often not what you want. 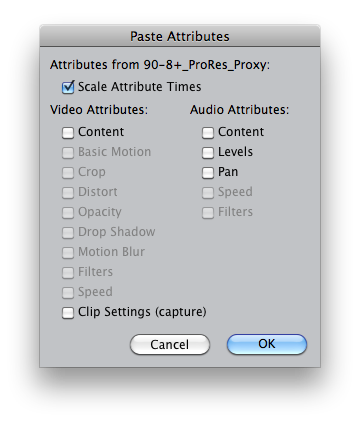 Ctrl-G in FCP can be used to easily close a gap in your timeline. There is no equivalent keyboard shortcut in Premiere to do this in one step.

Update: This one seems to have been misunderstood by a lot of people so I'll repeat it with additional emphasis: there is no way to do this in one step. There are many ways to do this in more than one step.

Only one project can be open at a time in Premiere. There is no way to refer back to another project without closing the first one.

When you cancel a render halfway through, Premiere discards the entire render file, unlike Final Cut Pro where the portion you rendered remains valid.

Using the JKL keys to navigate through media in Premiere can sometimes be tricky because the audio becomes high-pitched and difficult to understand.

10. No way to scroll tracks vertically with the scroll wheel

Scrolling your mouse vertically scrolls the Premiere Pro timeline horizontally. This is useful if your mouse is only capable of vertical scrolling, but if you have a trackpad or a mouse with a scroll ball, there is no way to scroll vertically to see extra tracks. There should at least be a preference for this behavior.

(FCP tip: if you have a mouse with a vertical scroll wheel only, hold down Cmd when scrolling and it will scroll horizontally.)

There is no indicator icon to show a through edit. A through edit is a cut within a clip where the frames on either side of the cut are adjacent to each other. It appears to the viewer as if there is no cut at all, and in most cases it is unnecessary and should be removed.

12. No ability to search for clips to reconnect

When media goes offline, you can browse to the location of the file if you know where it is but there is no way to search your entire hard drive. 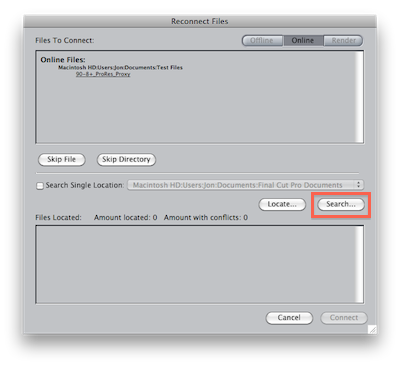 13. Tracks have to be selected when cutting clips onto the timeline

When inserting or overwriting a clip to the timeline in Final Cut Pro, the tracks that the video and audio will end up on are controlled by the buttons in the patch panel that are normally marked v1, a1 and a2. If you don't want to insert a track, click the button in the patch panel to disconnect it.

Walter Biscardi gives a video overview of this problem here.

Final Cut Pro 7 finally brought us a long-requested timecode overlay window. While Premiere does show timecode in the Info window, this is not a direct equivalent.

In Final Cut Pro 6.0.2 and higher, if you drag a clip and press the N key to toggle snapping, snapping will be switched on or off only for the duration of the drag. Once you let go of the clip, snapping reverts to its previous value. I found this feature very useful.

16. No function to mark audio peaks

Final Cut Pro can place markers on a clip whenever an audio peak occurs. There is no such function in Premiere.

While you can view how many times an entire clip has been used, there is no way to see if a particular frame has been used more than once. This is crucial for film projects that will be having a negative cut.

Sequence markers in Premiere Pro allow you to set a name, description, duration and various other options. Clip markers cannot be customized at all.

This is a list of things I think FCP does better than Premiere. In some cases, Premiere has no equivalent feature. In others, the feature exists but I feel it is lacking. None of these problems have prevented me from editing successfully with Premiere, but things would be smoother and certain workflows much easier if these features were present. I'm sure Adobe has been getting a lot of feedback from former FCP users and I have high hopes for CS6.

Sound off in the comments if you can think of any more things Adobe should borrow from Final Cut Pro.